This is how the vase that I threw on the YOU TUBE Video came out. I’m putting up the video again for all those who have emailed asking to see how the finished vase turned out. ALSO UPDATED: Here are the extruded teapots, glazed. I used a clear glaze with a Yucca Stamp near the bottom. Gotta love those underglazed “ink” stamps. Here’s the first batch of the “new and improved” version of The Spring Blossom Line. I like it just as much as the first version. I ended up substituting the “lime green” dots for “turquoise” and I fell in love with a new clay (new for me) from Texas Pottery — it’s a speckled ironstone and the turquoise dots work wonderfully with the speckles. I’ll put up the rest as a slideshow. This is what is going into the kiln today. The underglazes are covered with a clear gloss glaze that dries “white”.

These are Cone 6 stoneware. No leaded glazes are used. They are dishwasher, microwave, and oven safe. Here’s the two kiln loads. About half of them I sanded yesterday. I glazed a kiln load full last night and will put them into the kiln today for their second cook. I’m liking the Spring Blossom Design (that’s what I’ve decided to call it) that I’ve come up with this year. So most of these will be decorated with that pattern. In an earlier post I have two different shots of the same bowl posted. If you browse through recent entries you’ll see it. This is two pieces that I attached to one another, a small saucer turned upsidedown and attached to a pot to form a Grecian urn. I had just read “Talking With The Clay”, The Art of Pueblo Pottery by Stephen Trimble when I threw this pot. So I decided to burnish it with some river rocks I picked up on a trip to New York a few years back. It took about 3 hours to do the outside and inside but it was very different than anything I’ve tried before. The outside came out better than the inside, which dried as I was working on the outside and so was All I can say is that I REALLY know THIS particular POT!

On this particular piece I wanted to integrate some of my bead work onto the pot. The Tri-Leaf pattern is one of my favorites. I considered putting a verticle hole in each one and later hanging some other beads through it but by the time I thought of that they were leatherhard and piercing through them could have damaged the pot. It’s an idea for another pot and another day.

I loaded up the kiln this morning and only about 1/2 of what I was planning to kiln actually fit. So I have another load ready to go in tomorrow afternoon.

Then its sanding and glazing time.

A ton of greenware is going into the kiln tomorrow. Well, okay, maybe not a ton, but more than I usually stack in there. Since my studio is in my house, the greenware and bisqueware tends to end up occupying every spare space in the house. It’s now on the top of every shelf, every bookshelf … sometimes even used as bookends.

Think of it as temporary art. 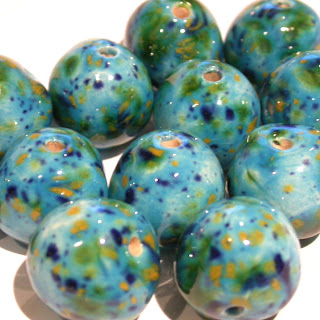 It’s Spring! Spring was the inspiration for these. I have three sizes on sale over at my etsy store, all reasonably priced.

Go here to check them out: http://nkpdesigns.etsy.com/ 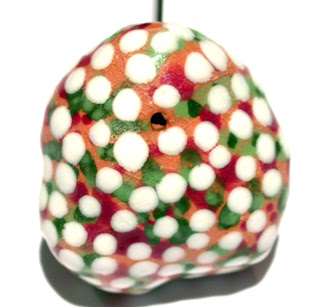 I was playing at the pottery wheel with a bit of clay and this is what happened: a hollow wheel-thrown bead!

The white dots are slightly raised for a smooth textural effect.

This could easily be designed to combine with precious gemstones such as pearls, shells, jade, and/or jasper.

This one of a kind bead is 34 mm from top to bottom and 15mm hole to hole. This is a nice big pot I handbuilt using that nifty slab roller. I love the combination of these glazes. It is a turquoise underglaze with a medium blue overglaze. The coppery look comes from the clay body which was used, in this case Ironstone from Texas Pottery. This is a cone 6 specialty clay “ironstone” from Texas Pottery. When bisqued it is a lovely pinkish hue, and at cone 6 becomes a yummy tan/gold. Yesterday, while this was firing, I threw 35 lbs of clay, which (for me) turned out to be 20 vessels of every kind: bowls, pots, and platters. The rest of this afternoon will be spent trimming and setting them to dry.

The Texas Potter and Sculpture Guild is holding a mini show for members at the Saginaw Library. The Library usually features paintings as display, but has arranged for TP&SG members to place up to 20 pots in the Library. They are all for sale.

I have two pots and a necklace on display. If you happen to live near the area consider stopping by and taking a look.