The time is almost here for the Guild sale. If you live in the Dallas/Fort Worth and/or surrounding area and you love pottery, THIS is the show for you!

On July 11th -12th, 2008, The Texas Pottery and Sculpture Guild (http://www.tpsg.biz.) will be having its annual Christmas in July Sale. It will be held at the Fort Worth Community Arts Center (http://www.fwcac.com/) at 1300 Gendy Street.

The Meet the Artist reception and sale is 5-9 pm on Friday and the show and sale is on Saturday, 10 am. – 4 pm. PLUS for the rest of the month of July, many of the participating artists will have a piece or pieces of pottery or sculpture on display. These pieces are also available to purchase. The sale features the work of over 30 clay artists.

When you arrive, don’t forget sign up at the Greeter table to win (at no cost) this beautiful piece of pottery by artist Barbara Throne.

Hope to see you there!

Please Join the Etsy Mud Team and the Etsy Green and Clean Guild for our “Spring Themed” dual challenge and raffle. Participants from both teams will choose a word from the list below and create an item that reminds them of or evokes the feeling of that word. Mud Team members will create a soap dish or dispenser, EGCG members will create bar or liquid soap.

Please visit the Etsy Mud Team webite – http://etsymudteam.craft-sense.com – to view all entries and vote for your favorite soap and soap dish or dispenser. Raffle prizes are displayed on our website, as well. Hurry – you don’t want to miss the fun or the chance to win a FREE prize!

Here they are. Fresh out of the kiln. Yay! These were so much fun to make. I am planning on making more. Definitely! I’ve added the second one (with hearts on it) to my Etsy Store. Major Bummer … I sold this mug over the weekend only to break it as I was about to wrap it up. The handle broke off. I was just heartsick. It is really a lovely mug and I don’t have another like it. Better it happen here than in transit! The customer was just fabulous about it though and I’m so grateful!

Thursday my big kiln had a coil blow-out. I spent Sunday replacing all the elements as well as the connectors. We plugged it back in and the switch seems to be out as well. So I’ll be replacing that later this week. Then I should have flawless firings for at least a year.

My other test kiln is in the shop because it won’t go past cone 06. I’d like it to at least hit 04! I have replaced the coils and the relay. I don’t know what is going on with that. Worst case senario is that I could end up just using it for bisque firings. So at least it is usable.

I did buy another small kiln a couple of weeks ago and so I am not kiln-less. Plus, I have that big one that was gifted to me by a pottery friend who moved to Albuquerque and if I would just get that one running, that would be fantastic!!! It is a 34 amp though and my other big one is a 21 amp and hubby doesn’t think our dryer socket can handle the extra amp-age and I’m not quite ready to risk the pottery for the house catching on fire — so maybe I’ll turn it into a cone 10 gas kiln WHOOOSH…. that would be fun!

The BEST news though is that I have finally figured out the decal’s firing temperature: Cone 06 is too low. Cone 6 is too high. I think I’ve hit the mark on Cone 04 though. I’m finally going to be able to do something fun with those and that’s exciting.

I bought 50 lbs of Laguna Frost clay on Thursday and it is still hard as a rock after sitting in water for three days. I’ve moved it to a bigger tub so that it can lay on its side. I am waiting for Alan at Texas Pottery and Clay Supply to make more of his yummy Red Taos clay. I’m planning on buying at least 200 lbs. I do have 50lbs of that left, though … but I love that clay and I don’t want to run out. I have 75lbs of some wonderful brown Buffalo Wallow and I have an awful lot of various reclaim clay, but I’m tired of the reclaim, also known as sludge. This cute child-sized teapot could be used as a salt or pepper or sugar or other much used spices pour. The spout drips a tiny bit so water or honey or cream would probably not be the best option.

I fashioned it after watching these videos on You Tube. These are a blast to watch and if you have time, watch them.

Mr. Choo charges hundreds of dollars for his small teapots. But he is a master and I am learner. So my teapots are considerably less and definitely not as well made. Sorry. Someday. Baby steps.

I threw this on the pottery wheel and hand-formed the spout, top, and handle. The removable top had stilt-marks which I sanded down.

I consider this a second and so I am pricing for half of what I would if I had not had to sand down those stilt marks.

This is dishwasher and microwave safe.Lead free glazes were used. Holds approx. 2 ounces. 3 1/2″ tall. Go have a look at it here. 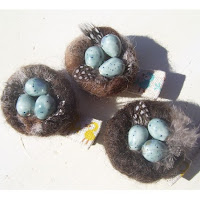 These nests with eggs in them were created by Goldilocks Barrettes from some egg shaped beads which I made especially for her shop. I love what she has done with them and lucky me, she has ordered more. So below is the process I go through in making them. 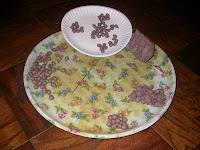 First I make certain the clay is the right consistency. It can’t be too wet or it will stick in the mold measurer. If it is too dry, the clay cracks.

First I measure the clay and then roll it into a round ball. Next I shape the top with my fingers to make the oval egg shape. Last I pierce with a small knitting needle.

After these dry, I bisque-fire them in the kiln, and after they come out, I glaze and re-fire. Today the kiln is going through a bisque-fire. Tomorrow I will take them out and glaze them, then after the glaze dries, they will go back into the kiln. These are going to be pink with speckles (hopefully). 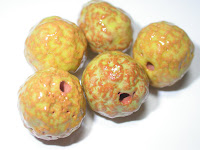 Oooo …. I put these in my Etsy store today. The glaze breaks over the texture in the most yummy way.

I’m behind on listing things in both stores. But I can’t do everything every single day. That would be w*rk. This week I’ve been on the pottery wheel every day. Last week I was experimenting with pouring slip in bead molds. It’s almost Friday, which means the week is almost over. I may buy a new bead kiln, too. Ooooo … so excited!

This is what I am telling myself today. I made a lid to one pot four times already because I was overworking it to death. Now if I touch any of these, they will surely fall and break …. I threw the pot yesterday. It is very small and probably only holds 12 oz. Yesterday I threw a bowl for Emtpy Bowls (Sorry So Blurry)…. …. and a failed attempt at a bowl which I turned into a small vase. The knob on the side is hollow. I threw it on the wheel. For some reason I had an urge to put feet on all of them. I don’t know why. I also threw a platter (no photo). It is still under plastic drying slowly..