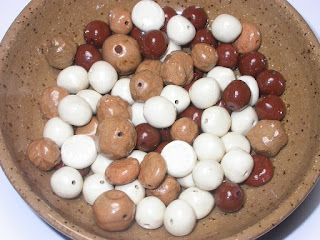 These are the three clay bodies I commonly use when I make beads. In my last post I wrote about how I was finally mixing up some of my own glazes. Like most, I started with a simple clear glossy glaze. I did not use any underglazes or stains because I wanted to see how the glaze performed on each clay body.

I took some pics with my digital camera on its macro setting. There are some fine bubbles in here which are not visible to the naked eye, and only really show up on the porcelain (white) beads. Click the photo to see these beads bigger. I love the macro setting on my camera for that reason. It’s like having a mini microscope. I’m not sure what the bubbles mean. It could mean that I could fire this glaze even hotter. It could mean that the beads need a longer firing time or a longer holding time or both. I don’t know. I’ll bring them to my professor tonight and she can enlighten me. What I’m really happiest about is that this glaze does fit these clay bodies, which all mature between cones 5 and 6. The white and the red mature at cone 5 and the light brown matures at cone 6. That is what I was hoping for the most! And yay!

Therefore, I think this glaze passes my test. It’s a once fire clear glossy glaze that definitely fires to cone one and does not crackle or craze.

Yesterday I bought the final items I needed in order to begin making many of my own glazes: a gram scale and some final common glaze chemicals. I decided that any glazes I made would not be toxic, so I have no toxic materials such as lead or barium.

For now my glazes will only be applied to my beads. In the kiln right now are beads which have applied to them a clear glaze that matures at cone 1. This is a once fire glaze that my professor at college let me copy out of one of her glaze recipe books. It’s a simple recipe. The problem is that my glaze scale does not weight ‘half’ grams. I had to estimate. I’m considering taking it back but I’ll see how this batch comes out first.

In the small kiln are three types of clay bodies which all mature at cone 5: a porcelain, and two stonewares, brown and red. These were all greenware beads, meaning they had not been bisque fired first. However, in the interest of experimentation, I also put in some beads of the same clay body that were bisque fired. I wanted to see what kind of difference there is, if any.

I have the kiln programed for a medium fire with a holding of 10 minutes after it reaches temperature. Because my kiln sits outside, weather is often a factor in how things turn out, so I have begun keeping a record like the one below in case I have a certain glaze that I would like to turn out similar:

Current weather and moon phase in the DFW area:

Tomorrow about this time I will be opening the kiln to find out and will post the results here. Now I’m off to take photos of some more pottery. 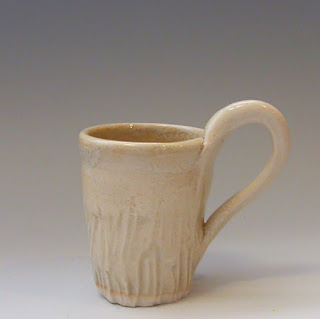 I realized a couple of weeks ago that I have not really photographed or listed pottery in quite a long time. My shelves are brimming full, especially after this last kiln opening at the college.

So I’ve been taking pictures every day for about a week. If I take, say, 10 items, maybe 2 come out good enough to list. It seems like noontime lighting is best. When it was raining all last week, it took a while to figure out how to get enough light without casting a shadow. About the time I got used to that setup, it stopped raining.

Taking pictures of pottery is vastly different than taking photos of beads. It requires much more setting up and taking down afterward. It also requires different programs in which to process the pictures. Usually I use Picasa to export and then Paint Shop Pro to adjust simple contrast. With pottery I use Picasa to export, straighten, auto color (which takes out too much ‘yellow’) and then I have to put those in a different program called “Gimp” in order to adjust the contrast because auto contrast in Picasa really takes that contrast to a level to where the dish does NOT resemble the real dish.

So that is the backdoor into how I take my photos. I use an old Nikon Coolpix 4500 to take my photos in case anyone was wondering. I still have a lot to learn about digital photography. Much of it is completely baffling to me. But I keep trying. Hopefully I will keep learning. 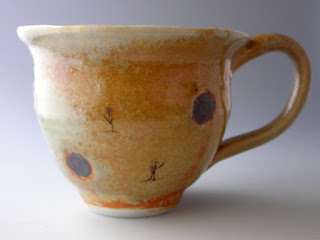 I’m trying to decide if I’m going to sell this one, keep this one, or use it for the Etsy Mud Team Mug Swap. It’s such a hard decision!

I threw this on the wheel, it’s Dave’s Porcelain Laguna clay, and added a handpulled handle. I added the handle a bit too soon though and from the top view, it is not exactly round. Then I glazed black iron oxide dots on the outside and the inside and dipped in Malcom’s Shino. It was reduction fired in a gas kiln to cone 10. Last I applied some of my hand drawn iron oxide laser decals and refired to cone 04 in my electric kiln.