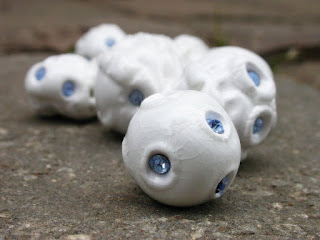 This is some Frost porcelain clay from Laguna.  It is extremely white, not at all vanilla creamy.

Each bead was pierced with several holes to allow for these 4 mm Swarovski light blue sapphire pointy back rhinestones.

I will be adding more photos of these into flickr over the next few days. 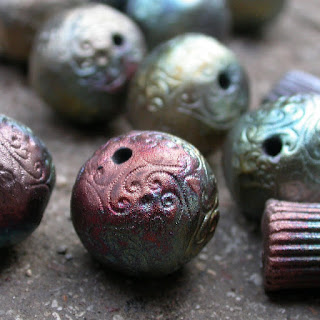 I finally got brave enough to raku in my backyard. It took a good while to get the beads wired into their containers, but once they were I was able to load them into the kiln.  I had wanted to use a smaller kiln. However, some of the lights are out on the digital readout and I could not figure out what information I was punching into the mini-computer.  That plan was abandoned.

The other small kiln was loaded with beads and already firing, therefore that possibility was out as well.  I was nursing the raku bug and I was itching to get started. I decided to use my bigger kiln.  The lid is heavy but it normally leans against the aluminum siding of our house when I’m loading. 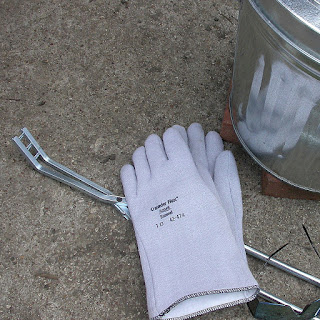 I figured the lid would be okay propped the same way whilst I was pulling out the raku. I checked with my husband and he said it would be fine.

I put a 04 cone into the kiln sitter and placed shelves up as high as I needed so pulling would be easier.  I loaded the kiln with my two homemade raku ‘bead’ containers and plugged the extension cord into the electrical socket.  I turned the knobs onto medium and let it go for about an hour, then turned both knobs on to high.

I don’t have a pyrometer so I was checking the atmosphere via the peekholes. After two and a half hours, the inside of the kiln was a dull red so I lifted the lid and peeked. The glaze on the beads was bright green, not shiny at all. I continued with the firing. 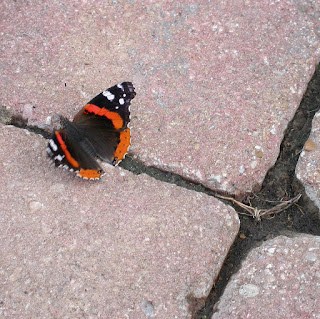 I sat outside wondering if it would have to reach cone 04 before the cone bent and the kiln sitter shut it off.

I noticed at college that the beads always took a bit longer than the rest of the pots.  I am guessing that   because the beads are in containers, the atmosphere has to really penetrate inside the container.

I waited, impatiently.  The butterflies were out and I snapped a picture of this one. The other one got away.  It was a dark oche yellow with bright yellow  and black spots.

It was hard to get this picture because the butterfly kept its wings shut most of the time, only fluttering them open briefly. By the time the camera would focus, the wings would be shut again.  Capturing this photo of the butterfly was about the same level of frustration as waiting for the kiln to get to temp. 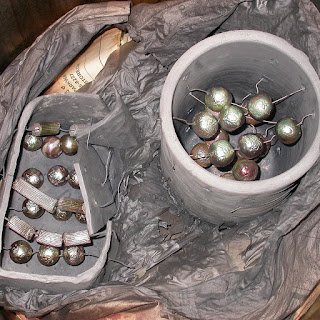 The next time I peeked into the peep holes, the dark red was noticeably brighter, but it was still a deep red. I put on the glasses, slipped on the gloves, lifted the lid and even with the welding glasses could tell the glaze was shiny. My husband was outside with me and he held the trashcan lid as I pulled both the canister and the box. I must have been squeezing the box too hard with the tongs because on the way to the trashcan, it broke.  It all made it into the trashcan, the newspaper caught on fire, and John closed the lid. 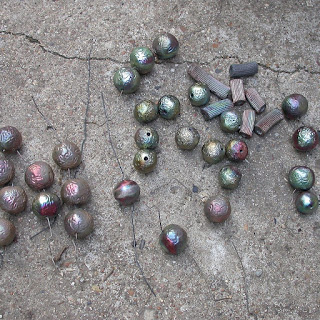 We went inside to eat supper, and after the dishes were washed, I made a batch of chocolate chip cookies. After they were in the oven I went outside and took these off the rods/wires. The beads are fired on stainless steel rods, very thin which I buy at the welding store for about $7 a pound. They come in three foot lengths and can be snipped with a simple wire cutter.

I do not think I will fire in that big kiln again unless someone else is pulling. It’s just too hot (approx. 2000 degrees). I can see why raku is addicting because instead of having to wait overnight or two days for the kiln to cool off, the results of the firing are almost immediate, and of course, the metallic and cool color variations that comes with the reduction in the trashcan is exciting. 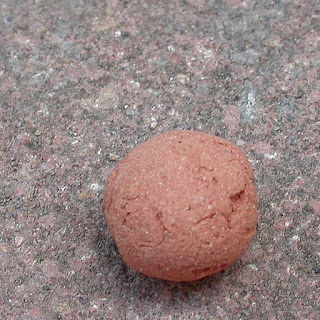 I have gardened many years and many times scraped mud off my shoes, amazed at its tenacity to cling to the bottoms, but the other day was the first day I thought to squish and roll it up in my hands.

I suppose its because I read Marsha Hedrick’s account of the wild clay she’s been harvesting near her house that nudged me to try this. I pierced this, left it to dry, and bisque fired it. This is how it came out of the kiln. It probably is low fire, but I’m going to try to fire it to cone 6 and see how it does. It was pitch black when it was wet. But it is reddish brown now. I’ll coat with a clear gloss glaze and see how it does. 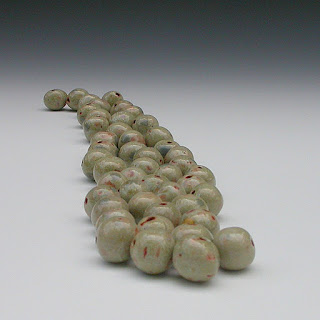 Last week I ordered new  photography background paper.  It came yesterday and I set it up and took a few photos.  The light setup I have is good in some ways, awful in others.  I have sunlight bulbs in the lamps, however, they shine something fierce on the pots and make them appear to have eyes (click here to see what I mean.)    I got some excellent advice from the Etsy Mud Team about what to do about that glare and this weekend I am going to try to find some frosted acrylic flexible sheets.  However, I thought I would take the paper and a few items outside and play with natural light.

On my back porch there is quite a bit of shade, so I quickly set the paper out and weighed it down so it would not blow away and started taking photos.  I started out with some beads. I usually place these under plain white paper or on the cement itself, but I thought I would see how they look on top of the photo paper. 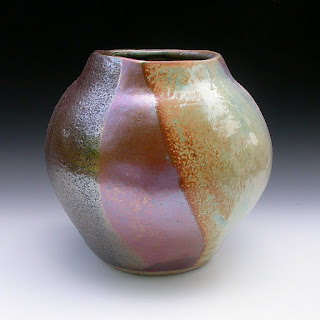 This is a pot I threw near the middle of the semester of ceramics.  Throwing bigger requires considerably more hand dexterity. I had trouble keeping my hands matched together on the inside and outside of the pot.  One hand invariably would travel a bit more horizontally past the other and create this lopsided look.

Also this semester, I experimented with a variety of dips.  This has three dips on it.  First I dipped a third of it into a High Iron Shino, next I dipped another third into Ginny’s Rutile, and the last third I dipped into a glaze our studio calls Rob’s Green.  It makes for six different glazes combinations, over and under.  Of course, with all shinos, it is best to always put them under everything else.  I have learned this the hard way. 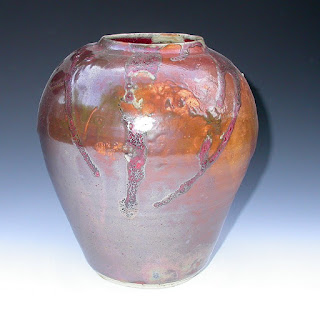 When I looked at this last photo of this pot, I was a bit taken aback at the side shadow that appeared.  I did not use a flash.  I suppose the sun must have peeked out of the clouds and caused this side shadow.  These two photos were snapped no more than a minute apart  under the same exact light conditions.  I suppose even outside poses its own set of problems.

This particular pot was glazed with an Iron Shino glaze for the first dip, and then I dipped the top into a red Peach Bloom glaze and let it run.

One of the long time potters in my ceramics class has been after me to work on my rims when I am throwing them on the wheel.  She knows that by the time I get to the top of the pot I am tired and just want to be done with it.  So this is the pot I decided to really work on the rim a bit more.  It is easy to see the difference between this pot and the pot directly above. Thank you, Linda!!! 🙂

I could work on the pots at home, by myself, alone, in my studio and perhaps eventually muddle my way through entire processes.  It is wonderful, however, to work in a ceramics studio near other potters who will force me to take a good hard look at what I’m doing and who push me to not get lazy with the clay.   I can’t say enough nice things about the folks I have met in pottery class. They’re the best!   I learned a lot this semester! I hope to take again in the fall.

I think this necklace created by Erika is simply amazing.  She beads jewelry for the sheer love of beading.  However, if she were ever to break out and begin selling it, she could certainly begin with this piece.  Erika individually wired a variety of ceramic art beads and combined them all into this wonderful necklace.

I especially love the jeans material draped under the necklace because that’s how I would wear this necklace, casual blouse with jeans.  Definitely click through and view the photo bigger.

Included in this necklace are ceramic art beads from Mary Ann Carroll of Artisian Beads Plus and Ingrid of PotteryGirl1. 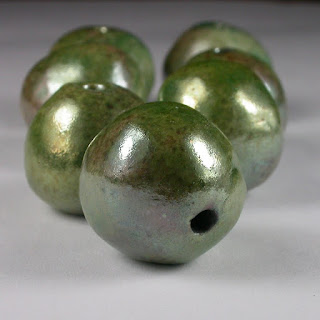 These beads were some that I was able to raku before the ceramics semester ended.  I am going to try to raku here at home, but I say that all the time and somehow I never get around to doing it.

These have a lovely luster on them, and while they reduced a bit, they did not reduce as much as a different batch. I will take a photo of those later. 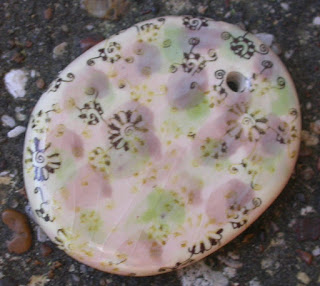 I have been applying low fire glazes under the iron oxide decal transfers the last week or so and I could just kick myself because I think I already knew that the iron oxide transfers get absorbed by the low fire glazes … sometimes.  Other times they work just fine and dandy.  But I forgot because I have been busy at school all semester and I don’t review my past firing notes near as often as I should. 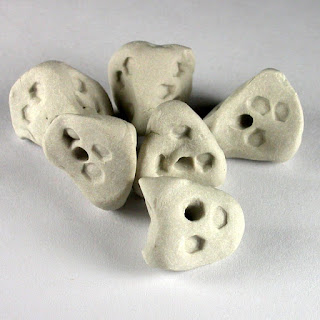 These are some cone 10 porcelain nuggets, unglazed.  The type of porcelain one buys definitely determines the whiteness and translucence of the porcelain.  This particular porcelain probably should be marketed as stoneware, though it is soft and yummy to the touch, much like porcelain.

After these came out of the kiln, I was left wondering: is there such a thing as porcelain cement?  These remind me of the white crystal landscaping stones used in flowerbeds.  I didn’t consider it necessarily a bad thing, just different. 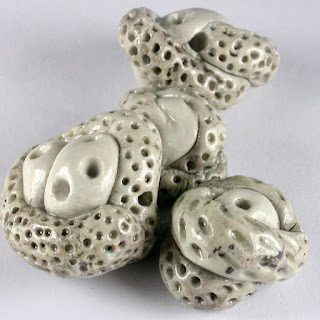 Also fired with these beads were some others which I decided to tint with a darker gray and fire with a clear gloss to see what that might look like.

I am intrigued by the flow of these beads.  The gloss glaze brought out facets that surprised me. I was not expecting to like these so much.  Currently I am waiting for some Swarovski Crystals (rhinestones) to come in the mail so I can add these to the waiting holes.  I’m thinking bright colors for contrast. I’m going to try a few sparkly clear ones to see how they look too, though.

UPDATE: to see how these look finished, here is a photo I uploaded to flickr.