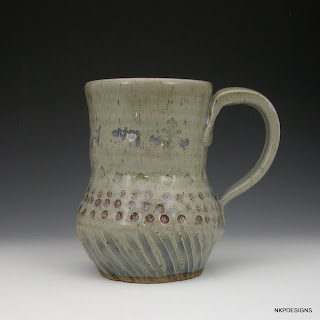 And this mug to the left is also being auctioned.  It is available until noon today. However, there are lots more to come.  Here is a webpage of the upcoming mugs:
https://nkpdesigns.com/philipsfundraiser/index.htm

Here is the previous article I wrote about why we are holding the auction:
http://blog.nkpdesigns.com/2012/07/why-mug-fundraiser.html

Do you want to place a bid?  Simply leave a comment with the price you want to bid under its photo.  If you win I will send you a Facebook message asking for your name and address and I will ask you at that time whether you prefer paypal or if you want to send me a check.   I hope that makes sense. If it doesn’t, please ask.

There are still 17 more mugs waiting to be fired at the local college where I take ceramic classes.  I went by there yesterday to see if they were finished and they haven’t had a firing yet. They have a small class and are still trying to fill up the kiln.

I guess that’s all for now ….thanks for stopping by!  — Natalie 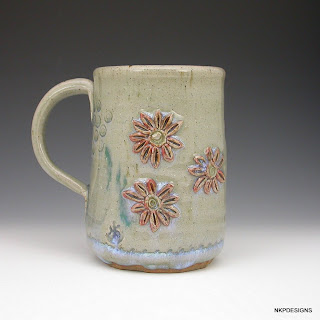 The mug to the left had quite the bidding war going!  I think it went for around $75, but it wasn’t the highest bidded-up mug, two of them went for $100, and I’m sorry to say I don’t remember which ones those were!

So much of the evening was a blur.

Oh, and the music was fabulous!  Is there anything better than coffee house musicians?

For those who missed the fundraiser, I still have 17 mugs that have not yet been fired.  And I also have the 18 that did not go to new homes. I plan on making them available, hopefully by the end of the week.  Never fear, I will update this blog and on my facebook page as well.

Tonight is the fundraiser that my son, Philip, is holding for himself. Yes, himself.

Backstory:  About a year ago, about the time I was going through my own cancer treatment (I am in remission, cancer free, btw) , my son, Philip, showed me a mole that was growing on his back, up near his neck.  I told him at the time that it didn’t look good and he ought to go to the doctor. I think he didn’t go because of what I was going through.

Finally his girlfriend (now his fiance) urged him to go. He did and the doctor said it was moderate melanoma.  He also told Philip that the thickness of it meant that it had already spread into his lymph nodes and he would need to undergo surgery, to remove the mole, the surrounding skin, and that he would have to be injected with a certain kind of dye to determine which lymph nodes were affected. Oh, and he’d probably have to have chemotherapy on top of all that, afterward.

I relay all this because I have the hope that if anyone reading this has a suspicious mole that he/she would have it checked out and not wait. The doctor said that if Philip had gotten it looked at a year earlier that it could have just been cut off for about $300, all done, no problem. 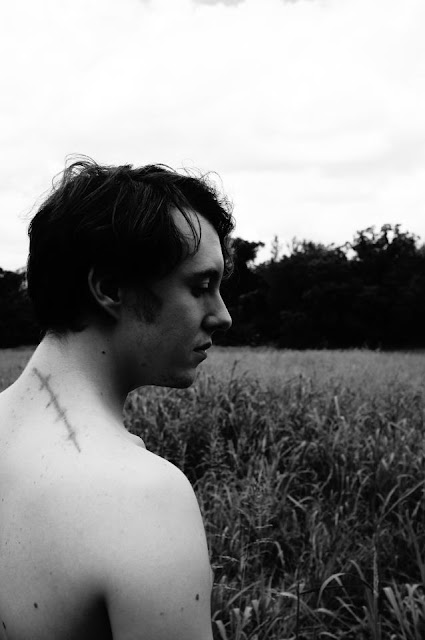 Since Philip doesn’t have insurance he came to his father and myself and asked if we would pay his medical bill.  So we did. The bill totaled:  12,212.

Right before the surgery was the procedure to inject his back with the dye to see where it would spread, specifically to see which lymph nodes were affected.  Because his mole was between his neck and shoulder, both the lymph nodes in his neck and under his arm pits should have showed cancer growth.  They wanted to pinpoint to see which ones should be removed, and apparently there are quite a few in each place, 20 or 30 or some crazy number like that.

However, when they injected the dye, the dye didn’t move toward any particular lymph node. So he was taken into surgery and the doctor removed the skin and inside the operating room they kept trying to see where that dye was headed and you know what? It wasn’t headed anywhere.  The cancer had NOT spread.

The doctor came out and in a long rambling fashion explained that he didn’t take any lymph nodes and that this sort of thing is very rare.  The surgery instead of taking hours took only about 45 minutes.

My son, after he recovered wanted to hold a fundraiser to pay his parents (us) back.  Here’s the link to the facebook page if you live in the Dallas/Fort Worth area and you want to attend:  Fundraiser Tonight:

But wait … there’s more to this story!

A few weeks ago, something amazing happened … we received a check from the hospital for $5700.  There was no reason given as to why there was a refund.  We can only surmise that it was because the surgery did not take as long as expected.  Also, some money has been donated already in the amount of $570.  So Philip only is going to only have to raise a bit less than $6000.  This is a far cry from the original $12,000.

His original plan was simply to play his guitar and play music and hope for donations but I told him I would handcraft some original mugs and he could hold a silent auction.  I took 6 weeks and made these mugs which are showcased on my flickr site .

After I put the mugs on the flickr site, there was a lot of interest from those who don’t live in this area who wanted to participate.  I have 17 more mugs that have not actually been fired yet.  However, when they are finished, I plan to hold one more auction on EBAY.  If you follow the FB page link above I will be posting more about this part of the fundraiser once the mugs are ready.

Thanks for stopping by —
Natalie

P.S.  I included my son’s picture to show how much skin had to be removed around the mole.  This is what happens when moles are ignored. Do NOT ignore suspicious moles! 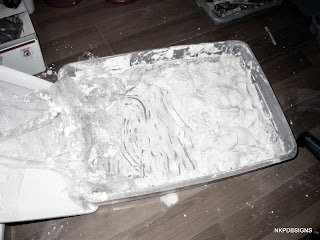 I thought I’d take pictures of this plate making process which I’ve been doing all week.

The picture to the left is the clay in the gloppy state.  It was completely dry and I added water and over a period of days scraped outer layers of clay off.

I started off with about 50 pounds of dry clay.  There are easier ways to hydrate clay and next time I’m gonna do it the easy way! 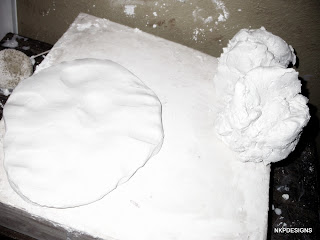 I placed the gloppy clay onto my plaster wedging table on the right.  After it sucked up the excess water, I wedged it and pressed it flat. 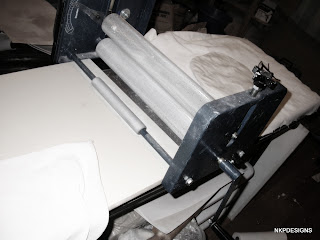 I placed the flattened clay between two pieces of linen fabric and ran them through my rolling machine until they were a little less than 3/8ths of an inch thick. 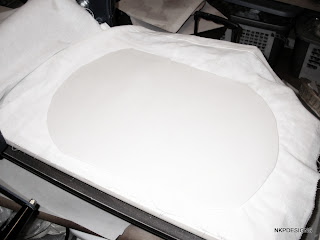 This process reminded me a lot of running a pizza dough machine back in my teenage years, except that one was electric.  Who knew rolling all that pizza dough would be a skill I used as a potter? 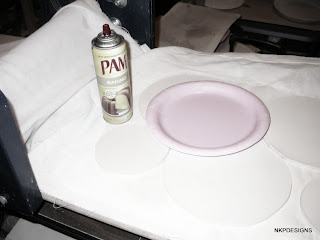 I sprayed cooking spray onto paper plates, and regular bigger plates, for the different sizes.  The spray keeps the clay from sticking to the form.  It also helps the edges not dry out so quickly.  In the beginning of this process I had some problems with cracked edges. 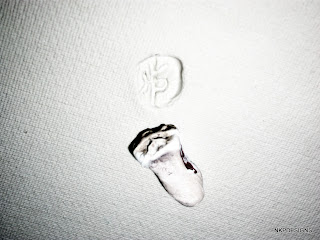 I cut out circles and on the back placed my potter mark, which is my three initials all run together (nkp). 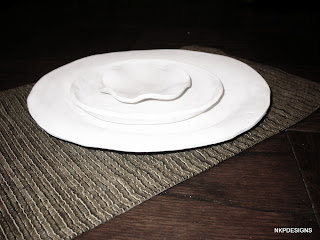 The linen pattern on this clay is subtle.  I plan to glaze these plates with a clear glaze.  The clay is a mid-fire porcelain.

The smallest plate has a small wave to it. I placed round bisque beads under the edges as it dried to create that effect.

All together I made 8 sets of these.  Now I will be waiting for them to dry out so they can be bisque fired.  I hope they will all make it through to the final glaze firing or I’ll be dragging out the rolling machine all over again. 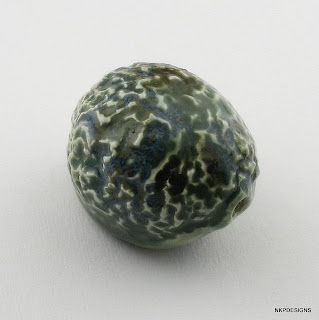 This is one of the beads I listed today and I particularly liked the way the glaze sunk into the recesses.

I have a few more with this glaze color that I’ll be listing tomorrow and the next day.  If you search my store for the phrase Sea Green with Blues you can see them all.

In other news … the dinnerware project is going well, albeit after a rough start.  I checked the two plates I had made yesterday and there were cracks on the edge, so into the scrap bucket they went.    If I had not taken them out of the forms and turned them upside down to dry I don’t think they would have cracked.  However, when I got to looking at their shape I decided I didn’t like them anyway. They were too flat.  There was absolutely no visual interest.

I thought about how to make these plates most of the day and finally after 5 pm I got to work.  I made them a bit bigger and used a different form to lay them inside.  I ended up making four.

The 50 pounds of clay that I began slaking down last weekend is finally all broken down into good bits and pieces of slop.  I am taking about 10 pounds a day and slapping that on my big plaster wedging board to dry out overnight.  I have another 25 pounds to break up but I think I’m going to take that outside and wrap it in plastic and a towel and go after it with a sledgehammer until it is in little tiny chunks.  I’ll have to wear a mask when I dump it into water but it will be better than waiting days and days for it to soak up water. 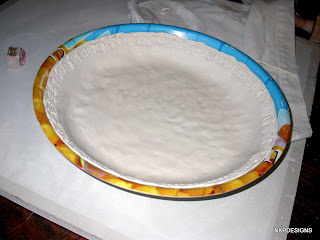 I’m attempting to make a dinnerware set of porcelain plates, bowls, cups, saucers, etc … for my upcoming son’s and soon to be daughter-in-law’s wedding present.  It took the clay all weekend to go from a completely dry state to a state that could be manipulated.  After I scraped all the sides down I ended up with about 8 pounds.  Over the next several days hopefully the rest of the clay will soften up.


I’ve thrown small saucers before but as far as plates go (thhhewwwwwpppptthhh).  I haven’t had much luck and that luck definitely held up today.  I got the plate the right size and then I scratched my head about getting it off the throwing bat. I scraped that idea, literally throwing the scraps into the recycle pile and decided to give hand building a try.


I have a small roller system from Northstar and I dragged it out and set it up, no easy task since it was sitting at the back of the closet.  I rolled out the clay as wide as it would go and it was not wide enough.  If I had taken the bat I was going to be using as a template and held it up to the rollers I would have quickly seen that wasn’t going to work.  So I dragged out my massive huge rolling pin and a large piece of sheet rock and placing bats beside the strip of clay for height (about 1/4″ thick is what I was going for), rolled out the first plate, except when I finished and put it into the bowl (I have lots of oil on it so the clay won’t stick) it looks more like a huge pie plate.  Therefore I decorated the edges with a small heart stamp and set it to dry.  Here I go to try again. Maybe they will get a set of four pie plates?