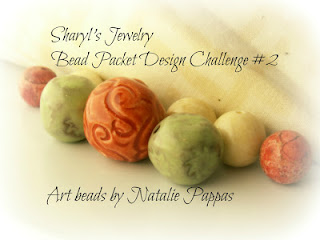 I wanted to let my blog readers who may be following along that Sharyl of Sharyl’s Jewelry has 10 participants that have been announced on her blog.  Read all about it here:   http://www.sharylsjewelry.blogspot.com/2012/09/announcement-of-participants-2nd-bead.html

If you asked to be a part of it and need details, the link above is the place to go to learn further details. She has all her packets of beads ready to be mailed.

As  I stated in this blog article  I am giving a $25 gift certificate to my bead store to one of the 10 participating designers to be revealed the day of the mini bead blog hop on October 27.  The winner’s name will be drawn randomly.  It’s going to be a lot of fun to see what designs the participants come up with! 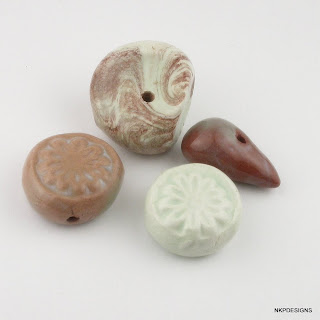 I have three distinct types of bodies in these marbled beads:  brown stoneware, red stoneware, and porcelain.

This photo on the left shows what the glaze I used (Sea Glass Gloss by mayco) looks like individually on all three, and the fourth is a marbled nugget of all three clays mixed together.

It’s a light glaze which lets the clay body shine through with a touch of minty green. 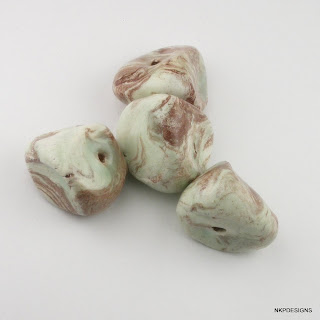 I have these four nugget beads on the right on sale in my shop right now. If you’re interested: Click here.

Thanks for stopping by!

At the end of the day it is great to relax with a bit of clay and some mellow music. Enjoy.

This year I bought myself a birthday gift, a Peter Pugger pugmill. I have lots of dried out clay in my studio that needs to be reclaimed and I have slowly been doing that but it’s very hard on my wrists and so this was an expensive, but lovely, solution. It’s supposed to arrive on Friday. FRIDAY! 🙂 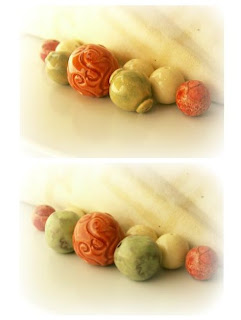 Sharyl over at Sharyl’s Jewelry blog is having a Second Bead Package Design Challenge using some of my beads.  Hop over there and read all about it.  The deadline to ask to participate is Friday, September 21st.  To make things more interesting I’m throwing in a $25 gift certificate for my nkpbeads Etsy store to one participating designer drawn at random to be chosen on October 27th, the mini-blog hop date.

Sharyl is opening up the challenge to 10 designers and emphasizing Art Beads as part of the creations.

Sharyl is also having a drawing for a $25 gift certificate to “Sharyl’s Jewelry” from among all who ask to participate in this event.

It’s going to be SO MUCH FUN! 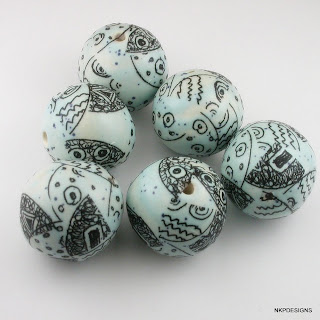 Tomorrow when I load the kiln, these will be in there.  After they are fired, the black will turn a maroon brown.  The glaze is a robin egg blue with cobalt blue speckles throughout.

Basically I drew three circles and Zentangled the insides with circles and rectangles and such.  I printed them onto decal paper with my laser printer and cut them into 4ths, and reassembled them onto the round bead.

Okay, onto the next experiment! 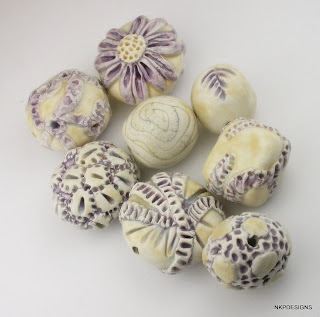 I pulled these out of the kiln this morning.  I was hoping for a darker shade of yellow but these have grown on me over the last couple of hours.

Anybody want the entire batch for $30 plus $2 shipping?  If so, leave me a comment and your email.  If there is no interest, I’ll list them in my Etsy store  individually.

Sizes?  The daisy lentil near the top is 22 mm and 17 mm at its thickest. The smaller round with the leaf imprint (there are four imprints on the entire bead) is 17 mm hole to hole and 16 mm at its thickest.  The other lentil bead near the bottom is approx 24 at its widest.   If you have any questions, please feel free to leave a comment.  Here’s a close up of them individually. 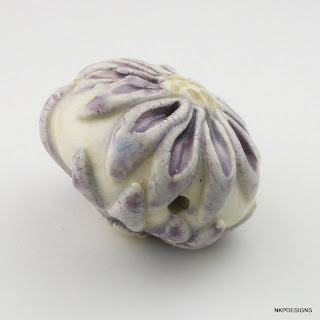 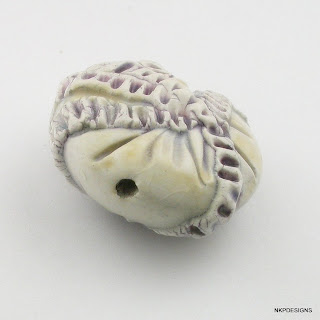 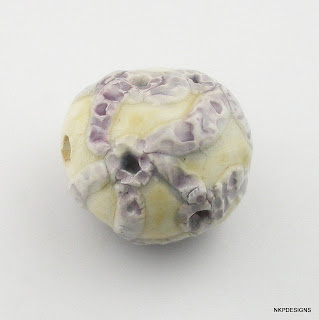 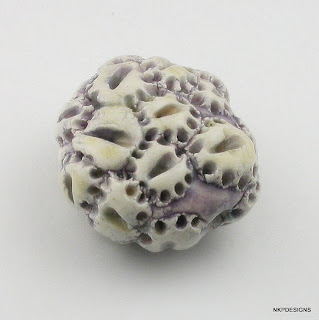 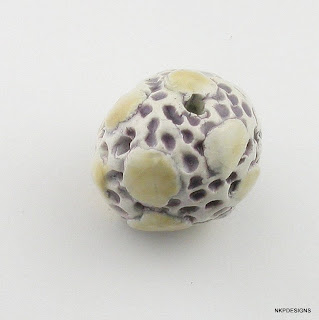 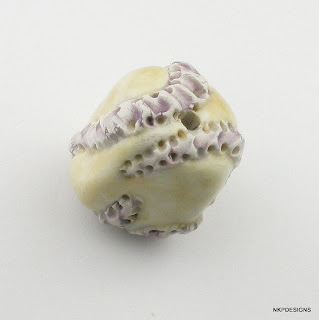 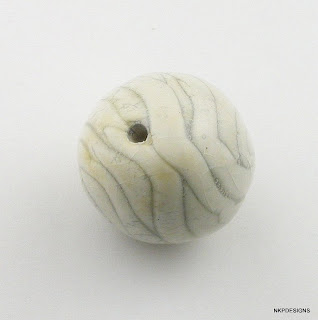 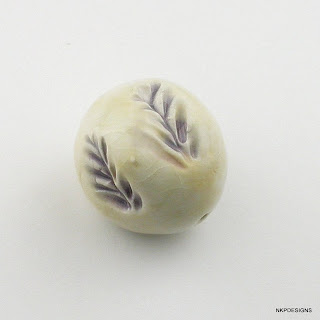 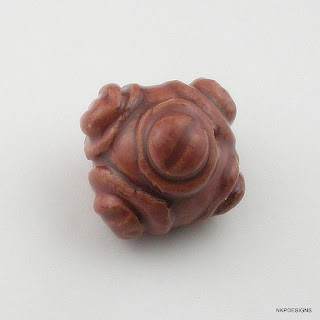 Do you like my jack bead?  I tried to make more of these but for some reason or another only ended up with this one.  It is a brown stoneware clay to which I applied a purple underglaze.  I sponged off the excess glaze so it only peeked out from the recesses before coating it with (my favorite) Victoria Red mayco glaze.  I rather like the effect. I’ve been using blacks or greens for underglazes and now I’m utilizing some dark purples.

I sat down yesterday with a lump of clay in my hands and made some new bead styles, variations of things I’ve already done actually.  As I look at them I wonder when I will glaze and fire them. I have so many beads I have not glazed and many more that are sitting around glazed but not fired.  They sit on paper plates on my studio shelves with cone numbers written on them:  cone 1, cone 04, cone 6, otherwise I will forget and fire them at the wrong temperature.

Yesterday I cleaned out my studio closet and threw out boxes that I have saved (hoarded) and suddenly my closet was navigable. 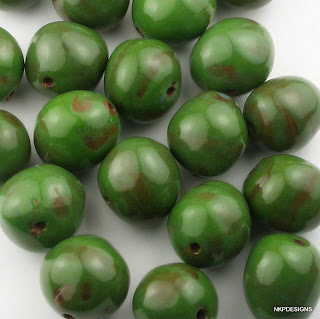 The day before I hand built some saucers for myself using my small tabletop portable slab roller.  I bought this several years ago and have hardly used it.  It is so easy to use I’m ashamed I haven’t played with it before now. It’s is absolutely darling to work with.  My husband has requested all new dishes and so I have begun doing that.  I tried to fire the big kiln the day before that and the relay blew. I am awaiting a new relay.  I don’t know why my relays blow so often. At least this time I didn’t automatically replace all the coils before figuring out the real problem.  I’ve done that the last two times the relay has blown.  I’m actually afraid to load beads into my smaller kiln for fear I will find that something is wrong with that kiln too! They tend to all break down about the same time.

I have been also photographing beads and trying to put as many online in a single listing as possible (you know, batches) but I’m finding I really do only have a few of each kind, except for a particular green bead which I am finding in all sorts of places in my bead stashes. 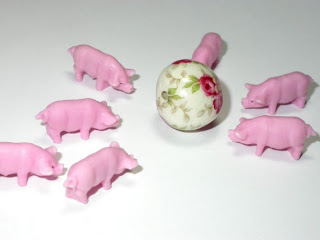 I was thinking about that yesterday when I was creating some beads and so I tried to make at least 24 beads per style but I must have forgotten all about that because by the time I put the tray away I had 10 beads with only 1 style per 2 beads.  It is almost painful to make the same bead more than twice.  Some days I am more disciplined than others.

I went hopping through my already sold beads which is now totaling about 60 etsy pages and I found several styles of beads I want to remake but I can’t remember which glazes I used.  On one particular bead I will never get that color of brown ever again because I’ve tried … several times.

In one of my past bead sales I used this photo above with the piggies standing all around it. I confess I was in an odd mood that day.  I had gone to the dollar store and found this package of piggies and thought they would be good models to look at pigs while I tried to sculpt a pig. Come to think of it, I haven’t tried to hand sculpt a piggie in quite a long time.  I love their little ears and snouts.  Too cute.   Maybe I’ll try to create a couple today. What are you going to be doing?

Thanks for stopping by!  — Natalie