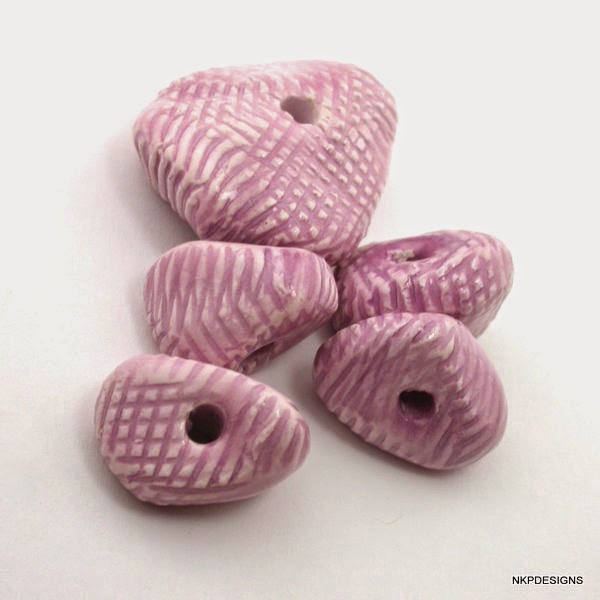 Earlier this spring, I got a bit obsessed with lines and using the top of a water bottle to roll over my beads (go check out a water bottle lid and the lines on it).  I rolled and rolled and rolled some more. It was a lot of fun.   Then last week I was finally able to glaze and fire these. I have more that I hope to list. If you want some just let me know and I can either list them on Etsy special for you or on my website.  I have a few of the larger and a few of the smaller.  I can mix or not.  Just send me an Etsy convo or leave a comment here.  In the meantime, these in this picture are listed right now on Etsy. I have some that are a violet-green too, but I plan to list those tomorrow.  They have an underglaze of pink with an overglaze of a pastel green. They are lovely. 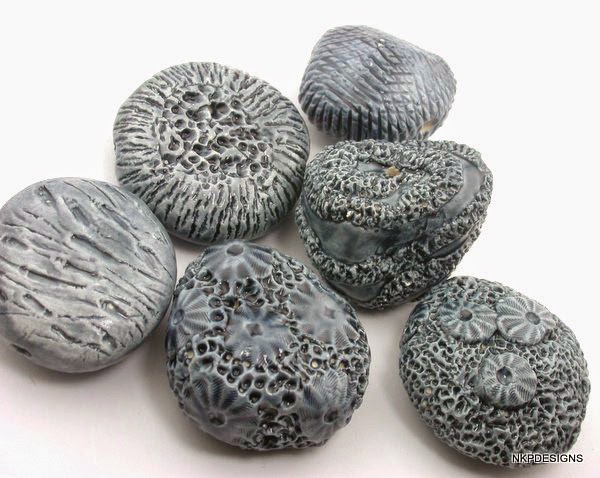 Last week I put beads in the kiln most every day. Saturday I took this batch out of it.  It is like a dark dusky blueberry.  It’s a glaze I’ve had forever and used a few times when I first started glazing beads and I have no idea why I shelved the glaze.  It’s really stunning. Maybe I needed to make the right texture for me to enjoy this shade of blue.
I hope to put these in my etsy store over the next few days. Thanks for stopping by! — Natalie 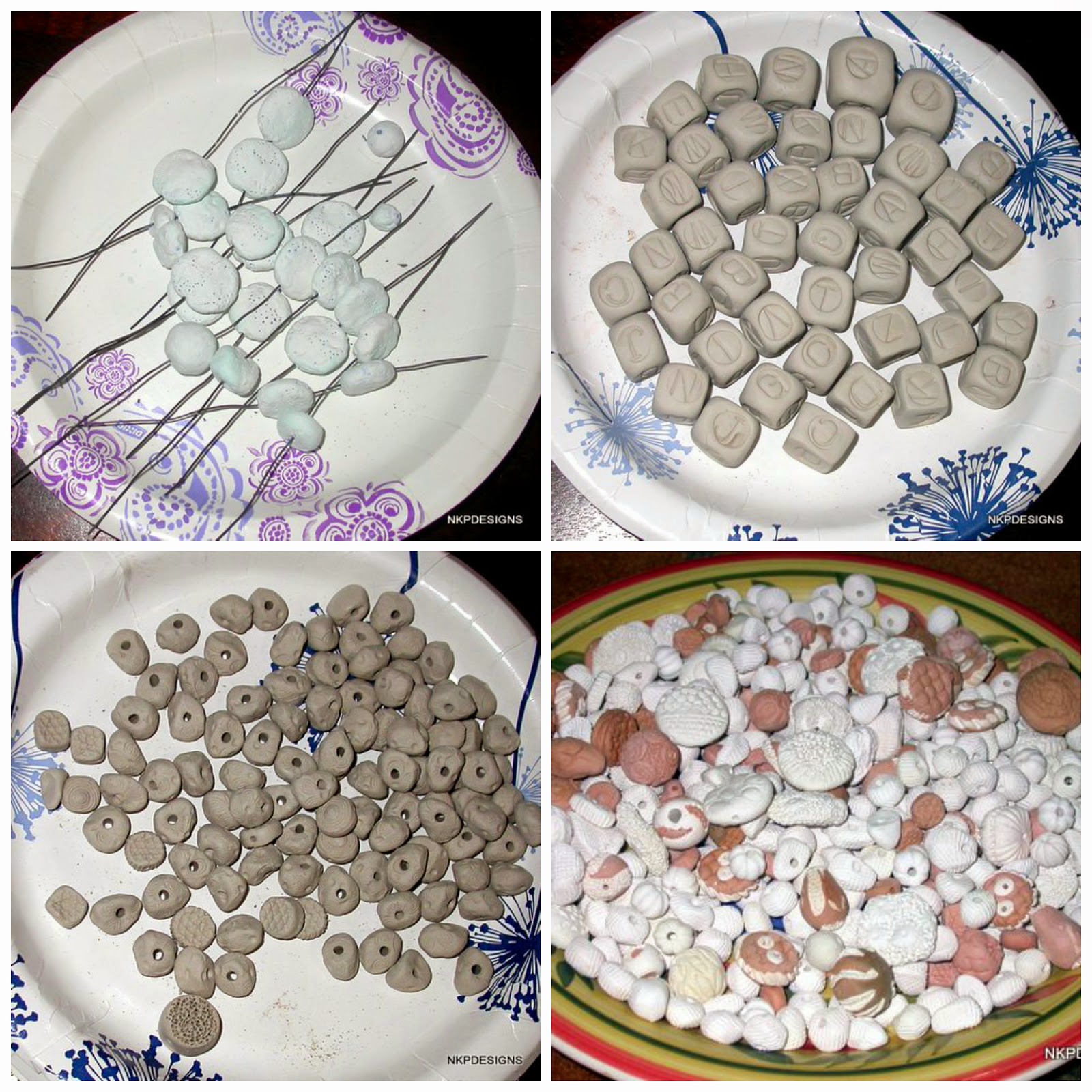 With the help of PICMONKEY I was able to make this collage.  The top two photos and the one on the bottom left hand side are all the items which still require firing.  They did not fit in the first two loads.  The items on the top right are not beads, but small alphabet blocks which I’m making for my sweet granddaughter.  She’s is SO good about never putting anything but food in her mouth but still I will be watching her carefully when these are fully fired.

However, the picture on the bottom right hand side are all the beads I created this summer that did fit in the first two kiln firings.  Today I’m sorting them out into baggies and planning on which color to glaze them. When I have enough glazed for another load, I’ll also include the rest.

As you can see, I have my plate full. har har har … Thanks for stopping by! — Natalie 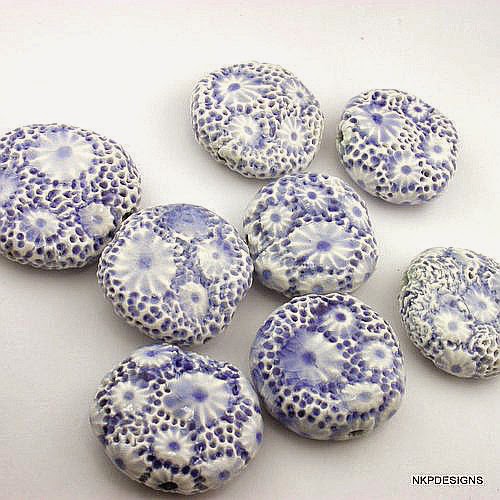 It was a delight to open up the kiln this morning and see so many pretty blue beads, and the best part is that I did, in fact, choose the correct blue under-glaze that I was a tad bit worried about in my previous posting.  Marine Blue under-glaze on Porcelain Clay (I’m putting it here so I can remember forever).  And for any who may be wondering how long it took: 7 hours and 12 minutes!

Today I have more of these in the kiln, some are different shapes, same color. I am also bisquing some beads I have worked slowly creating this past summer. I will have an entire blog post about that with pictures soon, so I won’t go into much detail other than to say that I am excited about having them in bisque form so that I can finally glaze them.

I am going to be selling all these organic Star Fossil porcelain beads individually on my website . I have five listed right now but I will be adding more later today and tomorrow.

Thanks for stopping by!  — Natalie 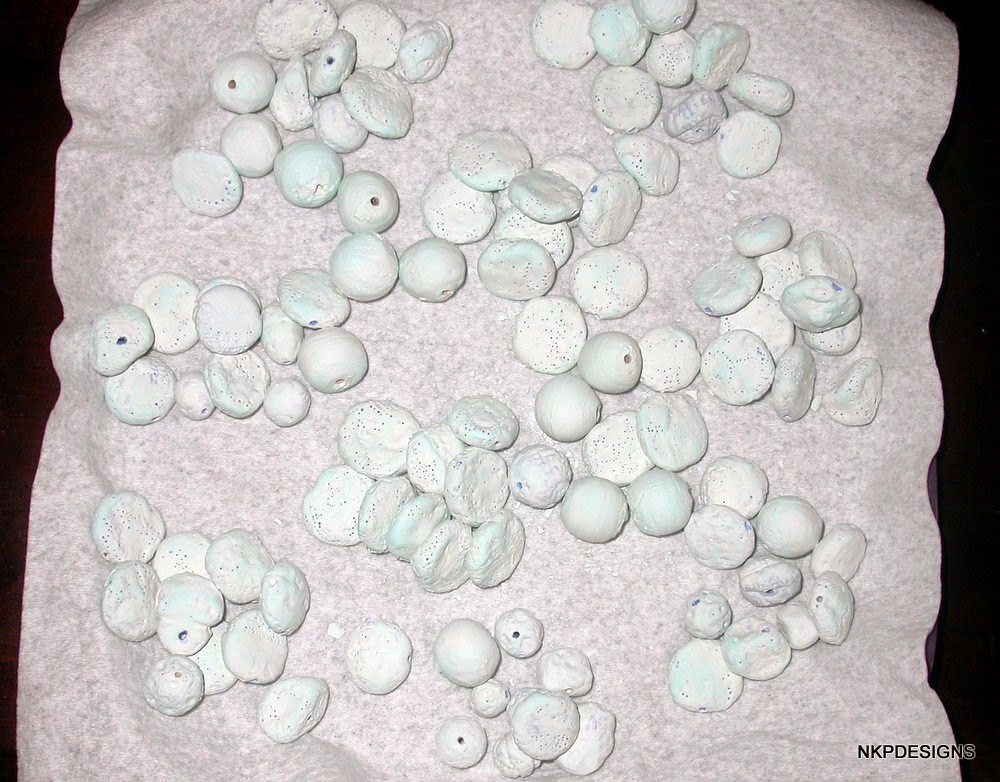 This is what a bit over 100 glazed beads look like. It took longer than I thought it would, but I just kept at it, and then they were done.

I had to get away from them for a short while, so I went for a bike ride (I have a road bike, and it is wonderful exercise) around my neighborhood.

After returning from exercising, I had to choose between fixing dinner or putting the beads on the stainless steel rods. I looked in the fridge and realized we have a couple of chicken breasts that were grilled yesterday still in there … decided to stir fry some veggies, throw in some Raman noodles, and chow down.  The veggies won’t take more than about 10 minutes to chop and realizing I had plenty of time still to spare, I strung all the beads on the rods and stacked them in the kiln. 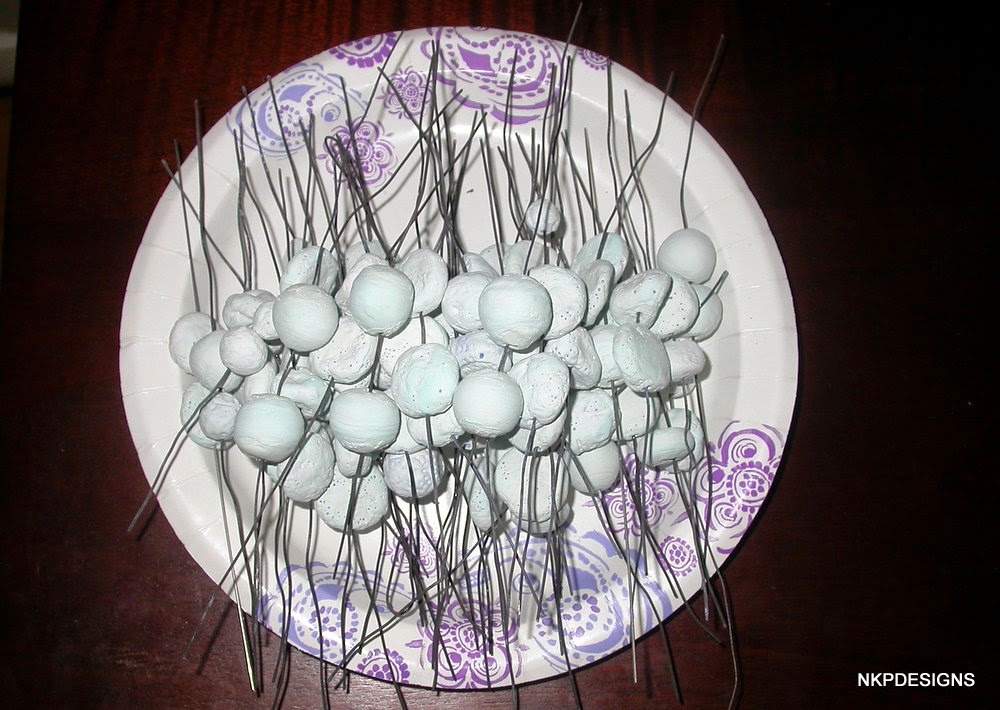 I probably could fit more in the kiln than I did, but whenever I squash the beads together I usually lose more than a few from bumping together during the firing.  So 2-3 beads on each rod works best for me.  The rods are not bright and shiny because they have been fired so many times.

Most of these beads which I have glazed today are in my ‘star fossil’ design which appeared in the Fall Stringing 2014 magazine.  I realized when the magazine hit the store shelves that I had sold so many of them over the spring and summer that I only had one or two left.  I did a bit of searching and found quite a few of those designs in bisque form.  After finding them, I had to figure out which underglaze I had used.  I hope it was Marine Blue because that’s what I glazed these in … if it was a different blue, well then, oh well.  Blue is a great color, no matter what color blue it is.  Can I get an Amen? 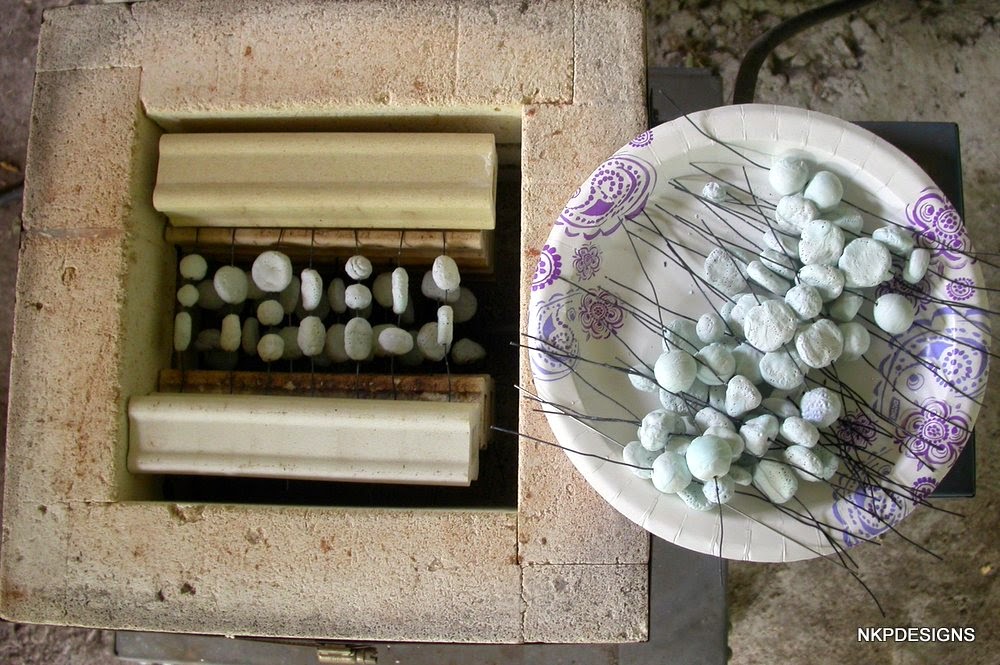 There are three rows of beads.  The first two rows have 12 beads each, so that’s 24 beads, and the top row has 17, 42 beads in total for this firing.  That’s almost half of what I have glazed, and I will try to get the rest in the kiln later.

I did go ahead and start the firing. It will take about 6-8 hours.  I am firing this batch to cone 04.

The kiln should shut off between 10 pm and 12 am.  I won’t go to sleep until they are fired.  I am not able to sleep with that kiln firing.  I like to keep my eye on things and make certain all is well.

I’ll take pics and post the results tomorrow. Thanks for stopping by!  — Natalie 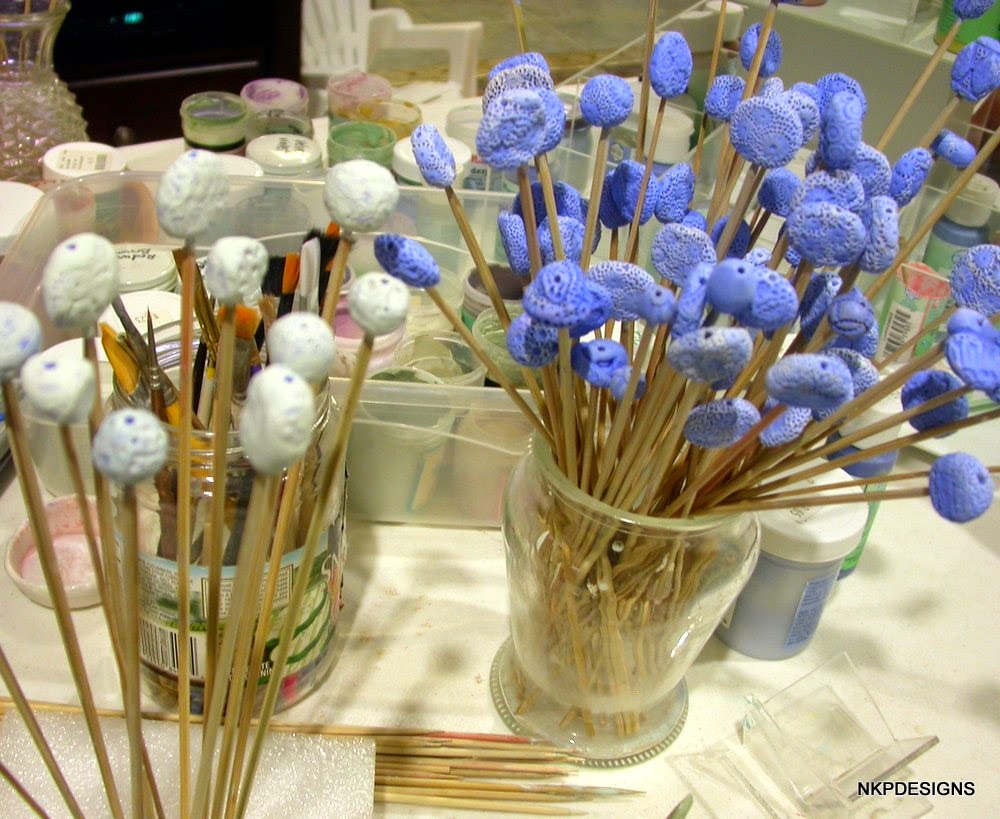 I am glazing today!

I have glazed and glazed and glazed this morning.  I have used a bright marine blue under-glaze on these beads in the photo.  Now I will have to glaze them with a clear gloss.  As you can see I have applied some clear gloss on a few already.  It doesn’t look glossy, does it?  Well, after they are fired, that glaze will melt into a clear glaze, making that blue really shine.

Later today I will put all these on small stainless steel rods, and tomorrow load them into the small kiln.

I also have got to do a few more pottery mugs/dishes/bowls so that I can fill up my big kiln. Or maybe I will just fire what I have. It is amazing the way things get away from me as I get older. I have so many, “HEY, I MEANT TO FINISH THAT PROJECT” moments.

Have fun and thanks for stopping by! — Natalie 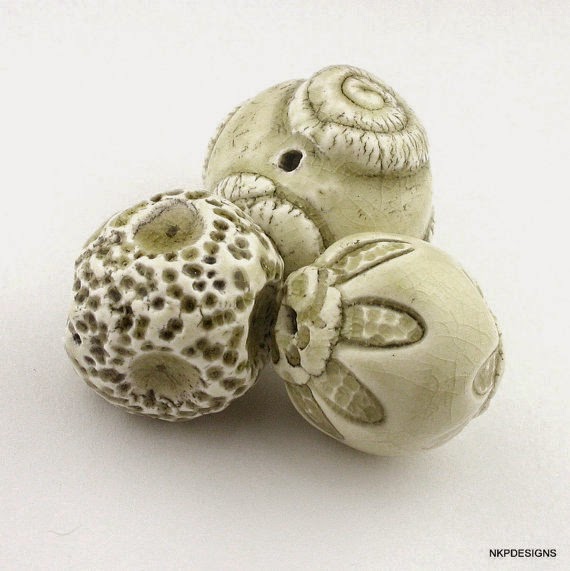 I have been updating the look of my website and today I made a lot of progress, adding about 20 new bead listings.  If you don’t know where it is, it is very easy to get to: https://nkpdesigns.com and if you want to go directly to the bead page it is here https://nkpdesigns.com/inventory/beads.htm .

I’m still playing around with the look of it … but for the most part this is what I’ve come up with. I’m trying for a bit of a showcase gallery feel and then if (and only if) someone wants to get the specifics on an item, each picture can be clicked on for a closer look.

I hope it is easy to navigate. Let me know if you have any problems.  Thanks for dropping by! — Natalie