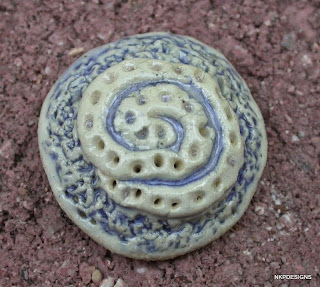 I don’t make many of these, beads without holes, also known as cabochons.  This one has been signed with my potter mark on the back.  It is also being offered over at the Ceramic Art Bead Marketplace on Facebook.

In other news, it was supposed to rain all day long but it did not rain.  That meant I was able to go into the front yard and pull a weed or two and so I did. Literally, a weed or two.  Turned out that my sprained fingers are not strong enough to pull those massive weeds.

Why are my fingers sprained? I had a bike accident (as in roadbike, not motorcycle) a few weeks ago.  I hit a slippery spot going downhill, not fast, but enough to when I had to turn, the bike went one way and I went the other. I was wearing bike gloves, but my fingers took quite a beating when I hit the ground.  I’m fine.  But my fingers are still healing.  Apparently it will take about 6 weeks, of which 2 have passed, that is according to Dr. Google.  But, whew, I’m fine.  Thanks for stopping by!