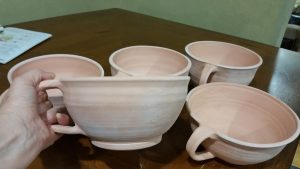 I had this fun project of making chowder mugs.  I was going to make 6 mugs about 24 ounces each and these are the photos of that progress.

First I had to figure out about how  big to throw them.  I had a couple of false starts but eventually got close.  I am definitely not a production potter, so these are not exactly exactly the same size, but they are close enough.

After they were thrown, I put them into the kiln for their first firing. Unfortunately one had a small crack around the top of the handle after it was finished, so I had to trash that and do another one.  Another week or so passed and it was fired.

Finally there were six again.  The next step was the glazing.  First I sanded for rough spots, especially around the handle.  If I get it too smooth the glaze runs like crazy so it is a definite balancing act.  Then I rinsed off the mug so that there will be no dust. 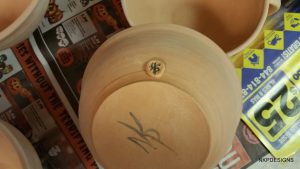 I applied black underglaze ink into the initials of my ‘belly button’ potter mark and also to the bottom.

The next step is to wax the bottom of the mug as well as the “belly button’.

I have a small baking pan that I very slowly melt wax over the stove.  I have the exhaust fan going because the fumes from the wax are toxic. 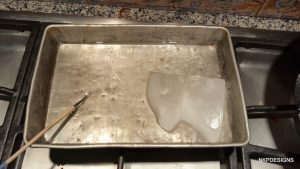 The worst part about waxing is the ever present peril of dripping wax on the sides.  If that happens (and it does very frequently), I scrape off the wax with a sharp razor and sand the area. If the wax is not completely gone the glaze will not stick to that area. 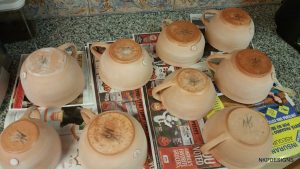 Here they are, completely waxed and ready to be dipped into the container of glaze.

I don’t have a big enough container to dip the entire mug, so I decided to half dip one side and then half dip the other.

You may notice that there are more than six mugs. That is because I did a few extra in case something awful happened during firing, that I would have enough for my custom order. 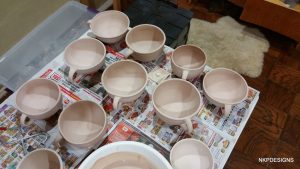 I am using a glaze that I mixed up via the book “Mastering Cone 6 Glazes” …it is a High Calcium Semi-Matte glaze with the recommended amount of cobalt carbonate in an amount that will not leach into the food.

Poisoning your customers is never a good idea.  😉

The next morning I placed them all in my digital kiln and set it to fire all day. I use the 5 phase firing ramping schedule found in the back of the book, “Mastering Cone Six Glazes”.

The first time to program a digital kiln is a bit nerve racking, it’s true.  However, once the firing schedule is programmed, it stays there under ‘user one’ and is a piece of cake to refire. 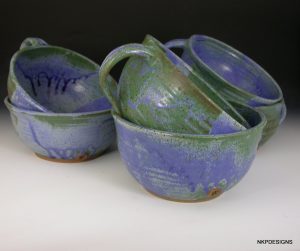