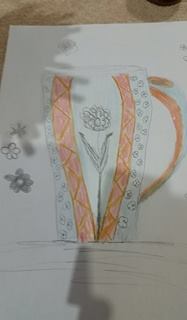 I have been so enthralled with watching Periscopes (if you don’t have the app get it) in which potters talk about the behind the scenes ideas in how to develop as an artist.  There have been so many I have watched, but in particular there are two I happened to watch about voice and style.  I was struck by what Lisa LaPella said in one of her scopes. I can’t remember exactly what she said but I ran for my neglected sketchbook and I started to make a list of things I love to do when making beads:

My background: I grew up in the southwest and the late 60s and 70s …love all things mid-century.  Being eclectic, it’s been especially hard for my pottery to develop a particular style because I do love so many different ideas/colors/techniques …. later that evening I listened to Jessica Putnam Phillips and her story about how her particular style developed out of her life in the military. Her focus was on the women who serve our country and I was further convinced that whatever I focus on that it must be something that is personally important to me.

I examined my recent green-ware mugs (red stoneware clay) I’ve been working on and wondered how I could bring some cohesiveness to my art.  I went through this list and began sketching ….  I wanted to draw lines in a curved downward position to emphasize the drawing as well as emphasize the curvy mug shape … I wanted to fill some of the same background in other areas with small hand drawn daisies … bright colors (check), repeating pattern (check) …applying and texturing sprigs (too late for that at this stage, maybe next time). 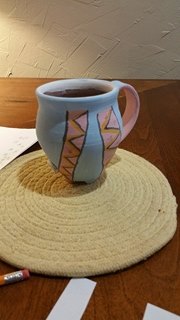 Because this mug is a red stoneware, I had to figure out the firings …all that under-glaze, over-glaze, and decals!  I decided to start out with the under-glazes. How many firings would I have to have?

I finally decided that if I timed it right that I would only have to have three: one for the bisque fire with under-glazes already applied, one for the clear glaze firing, and one final firing for the hand-drawn iron oxide decals.

When I finished with the under-glazes I started laughing because I had been thinking about the repeating patterns in the stripes but it didn’t actually dawn on me that it was kind of a ‘southwestern-y’ type pattern until it was finished.  I had written that down for one of my background influences, but it came out all on its own. 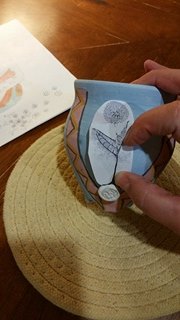 I began sketching again and as I did, I thought of my mother.  She has always been such a strong and bold figure in my life.  I usually draw daisies but she doesn’t remind me of a daisy, she’s more of a zinnia.

Zinnias have a strong stalk and hefty leaves.  They are showy as all get all (my mother refused to leave the house unless her hair was perfectly coiffed).  I grew in her womb and now that I’m grown, all that she is continually grows out from me.  I mean, who doesn’t look in the mirror at some point and see their own mother in the morning or find themselves saying those same phrases they never thought they would say?  “Six of one and a half dozen of the other” and so on and so forth.  It dawned on me that the roots of her ‘zinnia’ could be anchored on top the ‘belly button’ potter mark, because her roots are intertwined in every aspect of my life (whether I like it or not).  Note the tension in the mother/daughter relationship.  Last time I was with her, I was helping her eat and she muttered, quite loudly, “Well, isn’t this just a fine mother/daughter moment”.   My mother’s best humor comes out in her sarcasm. I laughed so hard. Then I cried. Then she cried.  When we wiped our tears, I handed her the fork.  “You can just feed yourself then,” I said.  She picked up the fork and finished her supper.  It really was a fine mother/daughter moment.  I treasure it.

I am looking forward to enjoying my morning coffee out of this mug. I plan to make more and I don’t know how long I will make them.  Styles grow and ‘voice’ changes. Is this my ‘style’?  Have I found my ‘voice’?  I don’t know.  But I do know that I am emotionally attached to this work and that doesn’t happen often with the pottery — it does with my beads I create, but not often the pottery and perhaps it is because when I am creating beads I am often thinking about things that are going on in my life and when I have made pottery in the past I have thought, “Is this going to sell or simply take up space on my shelves?”

Maybe developing your own ‘voice’ starts with asking yourself questions.  Thank you Lisa and Jessica for your thoughtful scopes.  There are others who have scoped on this topic, but these were the two I happened to watch.

7 thoughts on “Voice in Art – My Particular Style?”