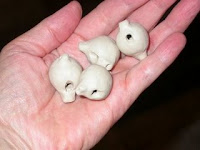 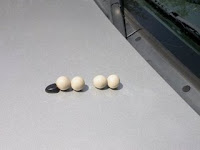 Funny story. I had to make some more round balls. I have discovered that the ball really needs to be almost leather hard before I cut it in half and hollow it out, but I didn’t want to wait a long time. So I placed five round balls on top of the hood of my car in a straight line. I went out about 15 minutes later and four were still there, but one in the middle was gone! That didn’t make sense. I looked a few feet away from the car and it was squashed flat! I believe a bird must have thought it was food only to be disappointed.