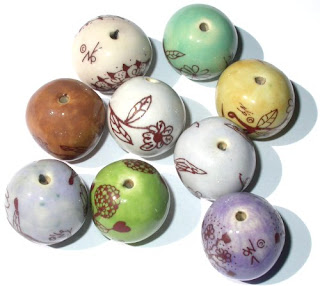 WOW! They are sepia colored! I achieved this at Cone 06. Opening the kiln is always such a surprise! I thought they would only become sepia at a much higher firing, such as Cone 6. A few more firings will perhaps shed more light on the subject of why. As it stands for now, I had these in the big kiln. I fired at low for about an hour, medium at about an hour, high at about an hour, and then closed the lid. It was not a full load, however, and that could make all the difference. 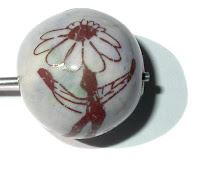 This is one of the beads close up. I’m going to add it to my BEAD Etsy store which I only opened last week just for the beads. I have tried to blend the two different art forms into the same store, web-blog, etc …. but it is hard because I get sidetracked with one or the other and those who are only interested in the pottery (or the beads) are really only interested in that. For those that are interested in both forms, there are links on the side to the other blog/store and I would love it if you visited both. But if you don’t … that’s okay too! I’m glad to grab your current interest.

For those who are interested in seeing these daisy forms on the pottery, check out my pottery blog. I am going to showcase a lovely teamug later today or tomorrow with all the Daisy characters.