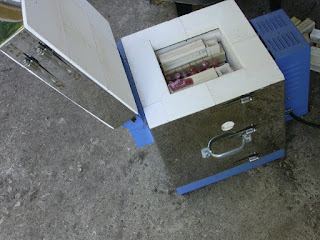 This is my new manual Paragon kiln. It sits outside on my back porch beside my bigger kiln (for the bigger functional pottery). This promises to be a good workhorse of a kiln.

I put this batch in it yesterday around noon. When they finished, about 8 pm, I started my other small digital controlled Paragon kiln with a small batch of whistles (more about that in a separate post). Both kilns share the same outlet so they cannot be fired at the same time. 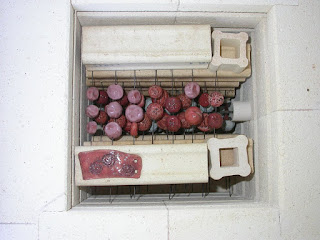 This is the view that I see when I open the kiln for the first time after a firing. It is when I am thrilled or exhale a disappointed sigh. I did both with this particular opening.

In this kiln I had a variety of porcelain, stoneware, and earthenware beads. The porcelain I had covered with a black underglaze which I wiped off before applying Mayco’s Foundations “Light Blue”. I had expected more of the underglaze to pop through the glaze, but it is more opaque than I thought it would be.   I do like these beads, however, I was going for a certain look. I will try again, but with a different shade of blue, hopefully one that is more transparent.

The round pink beads are an experiment with Speckled Pink a Dot on smooth earthenware. It’s glazy and drippy, kinda gaudy, but in a good way. 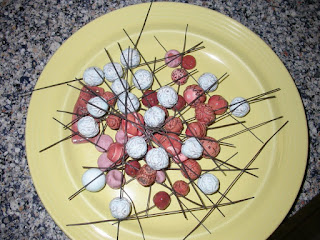 This is how I pile the beads when they are still on their rods onto a plate to carry inside the house. Click through to see the photo bigger.

This is not the greatest of lighting. It is on my kitchen counter sans a flash bulb with the settings on ‘auto’. No, this plate is not used to eat from, just to carry beads from the kiln to the inside of the house. Removing the beads from the rods is just a matter of holding and pulling. 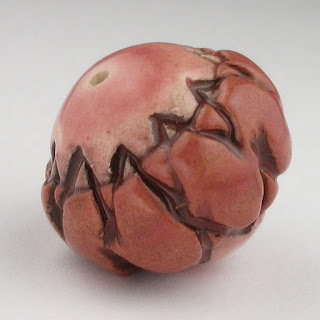 The nicest part in this firing was how the porcelain beads with stoneware sprigs turned out. I did this same technique with this as the earthenware and I love how they played nicely in the fire. Lots of contrast and texture.

The Victorian Red glaze glows off the porcelain and is transparent. It does not hinder the black underglaze which has settled nicely in the recesses.  The  stoneware sprig is blushing nicely with this particular shade of red. I am happy with this glaze, sprig, and texture clay combination.