The steady glow of the computer monitor convinces me that I must go outside soon and get some real sunlight or I might just fade away …..

I’ve been listing beads over on the NKP BEADS etsy site most of the day. The other half of the day has been organizing the TPSG coming up on the 7th and 8th of November.

By the way …. I was WRONG …. we are actually holding the Silent Auction for a group called Easel which will seek out and give donations to artists who are affected by hurricanes and natural disasters and the like. I’ll have to google that group to see what exactly they do. So much I don’t know about.

Here is but a small fraction of the bisque ware I meant to have glazed and fired by now. I keep getting sidetracked by other things. I created some more greenware yesterday. I had decided to throw ten tumblers, exactly alike in side and shape. Of course that didn’t work out. 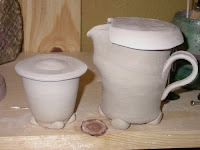 Instead of taking control of the clay, I allowed the clay to control me. I ended up with these. I seem to be into feet these days. It makes it easier to glaze and fire, that’s for certain. Also, I hate making lids. So I am determined to make lids for any item until I don’t hate doing it any longer. I used this same strategy for trimming and making lips thicker and handle-pulling, too.