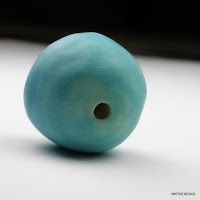 Many beads don’t make it from the second container to the third container because they don’t look like they ought to in the photos, or I see some flaw with the macro lens that wasn’t apparent to my naked eye. That bead will go into yet another container. It will go into the trash if it can’t be refired (say there is a chip on it I didn’t see), or it will go into a container for another glazing if I see a place where the glaze didn’t take nicely. Sometimes the bead looks much prettier in the photos than they do in real life. These beads get set into my give away beads container. I also make a note not to use that particular glaze again with that particular clay. They are truly treasures.

However, most of the beads that don’t make it into the third container go back into the first container to be rephotographed because they were blurry.

In my bead store I have about 20 listings that are expired, but they need to be rephotographed. So there they sit.  I have been rephotographing most of my store since early last year — when I started rephotographing these I had a bit over 200 listings, so I’ve been steadily redoing my entire stock for almost a year, plus trying to put in new listings as well.  It’s been a long haul.

Sometimes the simplest beads are the most fun to photograph.  The bead in the photo above has some good memories.  It is the last one in that series. It’s just a plain Mayco turquoise cone 6 glaze on a white stoneware body. I don’t know why they didn’t come out shiny. They came out this wonderful matte color.  I think I had about a dozen to start with.  Some I put decals on, others I added a coat of clear to and refired.  It’s all fun.

After I actually list the beads, I place them in huge hatboxes. I have ziplock bags of “2s” and “3’s” and “4s”, etc … up to 12.   If I have similar beads, I write their listing numbers on a slip of paper and include it in their little baggy.  Then I can be certain I am sending the correct beads.

I love making beads. Thanks for letting me share my working day with you.

3 thoughts on “So Many Beads So Little Time”