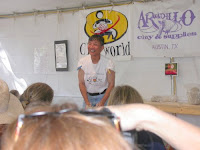 This was my first time to this festival and it was SO MUCH FUN! I enjoyed every demo and wished I could have been in three places at once. This is held in Gruene (pronounced ‘Green’), Texas every year and there is incredible pottery to buy and incredible demos to watch. There were three tents set up with demos going on in each one at the same time. So difficult to decide which one to see. One can only hope a few of these demos that I didn’t get to see ends up on You Tube. Wouldn’t that be great? 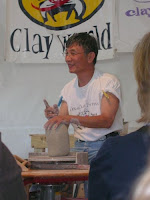 The man pictured in these three pictures is named Vorakit Chinookoswong (V. Chin for short). His work is stunning. He grew up in Japan (but I believe he was born in Taiwan). Being a potter in Japan is apparently very different than in the United States. There you have to work your way up to the wheel by cleaning and wedging. Even when you get on the wheel, you are limited to a certain grade of clay. And you must repeat the same shape over and over and over and over and only then can you graduate to a different shape. One one hand, I hate that idea. On the other hand, I can see much value of some of that amount of practice. For example, I can see myself being told to do a certain shape over and over, but I would want to choose the kind of clay I throw. It’s the American way! lol! It was fascinating to listen to V. Chin as demoed and shared what it was like to be a potter in Japan and what it is like to be a potter in America. 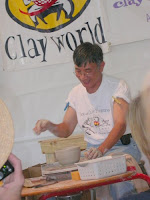 Every year this group of potters holds a silent auction (for scholarships and things) and this year they also decided that some of the money would go to help rebuild V. Chin’s studio which was destroyed in Hurricane Ike. After watching him demo, I could see why V. Chin is beloved by so many potters. His enthusiasm and positive outlook is to be much admired. That is why I am thrilled my pottery guild, the Texas Pottery and Sculpture Guild, will also be holding a Silent Auction for V. Chin at the November Christmas show (November 7th & 8th at the Fort Worth Community Arts Center.

Visit V. Chin’s Gallery online today. If you have never seen his pottery, you will fall in love with it. And if you live in the DFW area, please come to the TPSG pottery show and bid on a piece of pottery made by guild members which will help rebuild V. Chin’s studio.